28C Musings and A Message To Readers

When I came in the door from the garden the phone was ringing. The land line, you know, the one you don't carry around.  I picked it up and it was an acquaintance who does sometimes phone.

"I called earlier", she said, "but I guess you were out."

"Well, I was in the garden, pulling euonymous."

There was this total silence. Now, this is not a person I know very well. We have several friends in common, so she probably knows me better than I know her. It took me a minute to realize that she probably isn't a gardener, so what I'd said might have sounded a bit strange.

I decided not to explain to her that I had gone outside with the firm intention of doing some easy, relaxing weeding. I was only going to pull the Forget-me-nots out of a small part of my rockery, and maybe reduce the nearby Ajuga patch a little. That's was all I was going to do today; after all, it was about 28C out there and the mosquitoes were hungry.

Ajugas are easiest to pull when they're blooming. For one thing, that's when you can find them. For another, that's when they are still attached to all the little baby Ajugas at the ends of their many runners. If you wait a bit the runners seems to disengage or something, forcing the little ones to take up independent living, which they do with great tenacity. At that point, instead of pulling one Ajuga plant you have to pull a dozen, and believe me, they hide and they hold on.

I pulled happily, filling my bucket many times and dumping it on the Hop Vine which always comes up through that particular compost pile. I've been trying to discourage it for years but it's still going. One year it got away from me and I didn't know it. I wasn't seeing it and started to think maybe it was gone and then I looked up into the Maple nearby. My illusions fell in little shattered bits all around me.

The Forget-mes were no problem. They come out easily. If you pull them before they form seeds they don't even stick to your gloves but once the little burr-y seeds form they stick to everything. Do not pull Forget-mes in a flannel shirt.

Then I decided, in an uncharacteristic moment, that the little row of Cedars (Arborvitae really) which had grown up in the rock crevice had to go. They were only about a foot high five minutes ago but here they were, towering over my head at a good 7-8 feet. Ever cut down 3" diameter Cedars with secateurs? And then cut them up so you could put the branches on the compost pile and the trunks in the use-for-something-sometime pile? It was quicker than going to get the saw.

The cedars had a lot of last year's leaves caught at their bases. I was going to leave them there but then I tripped over something. Seems an old Euonymous vine I planted there years ago was still going. It was just doing it under the leaves. I pulled. Ten feet of yellow stem, with roots along it, came up. I rummaged around in the leaves, found more yellow stems.... I pulled, clipped, wound into a bundle, pulled, clipped, wound into a bundle... that darn Euonymous had turned into over twenty feet of many many stems, all rooted (shallowly, thank goodness) in the large crevice the Cedars had been in. It had also, very sneakily, sent skinny, hardly noticeable little green stems with small green leaves into the adjacent fern and Trilliums patch. Pulling those wasn't so easy as I didn't want to damage the good guys. So I had to pull gently, clip, carefully disentangle, grope for the end of the stem, repeat. And repeat, and repeat.

In the 28C heat and no chance of rain again today. They said 'risk of thunderstorms' on the news, but I think it should be 'slight hope of thunderstorms' but anyway they didn't happen and everything is terribly dry.

This Euonymous, by the way, was sold to me by an actual rock gardener. I don't remember what species it was, but it was supposed to stay small. When it first bloomed I was intrigued, it was such a strange flower. I had never seen one before. 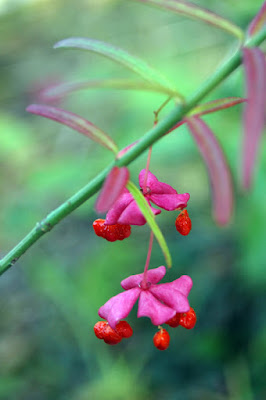 Then, still being completely naive on the subject of Euonymi, I bought and planted an E. fortunei. It looked great in all those English gardening books. Yep, and it looked great in my rockery. All over my rockery. All over all the other plants in the rockery, and the  rocks, and my paths and for all I know, some number of small animals. It took hours of work to dig it out and for a year or two it keep sticking tentative little yellow leaves up above the soil. 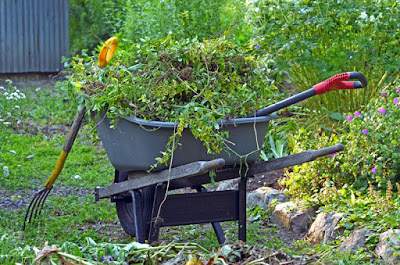 No more Euonymi for me, thanks.

Now, a Message to My Readers.

I know that I am writing this blog entirely for my own amusement. I know that and I'm good with that, but I wouldn't mind having a few more readers! It does begin to feel a bit like the sound of one hand clapping if nobody is reading. In July, feedburner is going to stop handling the email notices about new blog posts that you have been getting. I have to either change the format of this blog, or find another program to do the same thing, or ??? There are options, I don't understand all of them yet... it may be possible to do it completely seamlessly, or it may not. In any case, please, stay in the boat! I'll let everyone know soon.

Meanwhile, one thing I do know: I would like more readers.

I know there are lots of you keen gardeners out there, and you all know others, so here's a bribe! Kind of a double bribe!

Anybody who shows that they would like this blog to continue, by subscribing, or leaving a comment or sending me an email or phoning on the old land line or otherwise communicating with me, will get their name put into a (virtual) hat. To keep it fair I will only put any name in a maximum of 3 times, that way someone who leaves lots of comments will still only get 3 chances. On Sept. 1, 2021, I will draw one name and that lucky person will win the Tilley Hat of his or her choice. Any Tilley hat, any colour, style, size, up to a value of CAD $120.00. That's a pretty good bribe, eh!

And, just for fun, I will select one name for a second prize: a Japanese Hand Weeder from Lee Valley Tools in Ottawa. This is a short hoe-like tool with one sharp edge and is the best weeding tool I have ever used. My criteria for selecting the winner of this prize will be... completely arbitrary. I'm going to pick what I think was the best or most amusing or most unusual communication I received all summer to win this prize!

My contact info is in the box at the top to the left of the blog text. If you decide to play, do be sure I have your name and a way to get in touch with you should you be the winner!