Sometimes it's the small things that give you the best sense of satisfaction. Never mind if I accomplished anything serious today, I did at least plant my potatoes.

Last spring I planted peas and lettuce and as soon as they came up the raccoons dug around and ate the seeds and trampled the seedlings. I was so mad I gave up and didn't so much as look at the veg patch again all summer. But it bothered me. I kept feeling I hadn't tried hard enough. And to live in the woods in the middle of a large garden and not even have any fresh peas.... well, I wasn't happy about it.

So far, my peas are climbing up their sticks nicely, thank you, and we have already had several salads of lettuce, spinach and assorted nameless greens. I like those packages of seeds called Mesclun. You get a variety of lettuce-like leaves, and the mixture both looks good in the bowl and tastes good. You can add regular lettuce leaves, if you have any, some green onion and maybe a tomato and you have a fine salad. And you can have some fun when you collect the leaves by tasting the unfamiliar ones. Some are very spicy!

My veg patch is pretty small. It's basically 20' square, although a corner is taken out to accommodate an inconveniently located Crabapple tree. That's quite enough for only two people, except that there isn't room for potatoes. So I have been eyeing the area beside it. There is a space there almost as big, but roughly triangular, and sloped steeply to the South. At the bottom of the slope there are Daylilies and Canada Anemone, and at the top and along one side, the woods. I've had a compost pile there, and have periodically hacked down the thistles and mulleins that seem to favour the spot. Today I dug it over. Yes, that is my crowbar standing up on the left - a vital gardening tool in my rocky garden. I found several fine rocks! The soil looks pretty good, though, and I had no trouble digging it. 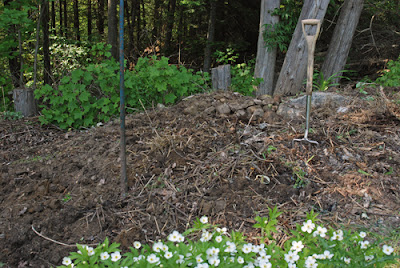 Then I planted 10 pounds of Yukon Gold seed potatoes.

This is one of my favourite tricks. When I want to make a new garden, I get it roughly dug and tidied and plant potatoes in it. They come up quickly,  nice dark green plants which look pretty good, and they fill the space until I can get other things to plant there. You're not supposed to plant potatoes in soil which has stones in it, but I haven't found it a problem. A root hits a rock, it just detours around it. Not good with carrots, but fine with potatoes!

There was some space left, so I put my two large and several smaller tomato plants, and my one squash plant there too. Only one squash seed germinated, and I don't know if one squash plant will grow any squashes, but I might as well plant it. Here's the spot as it looks now: 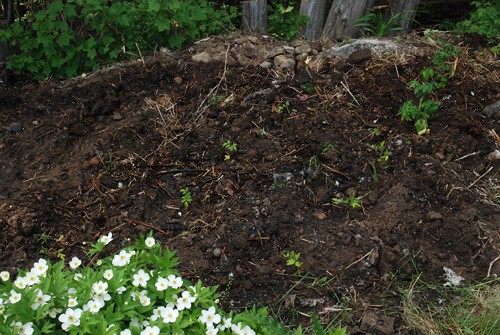 Those little green things are the tomatoes..... you can see the space is larger than it seems at first. It looks kind of rough, but I'm pretty sure I'm going to be enjoying tiny new potatoes soon!
Posted by Lis at 6:22 PM