Saturday, the first day of the Botanic Garden Tour, dawned dark and damp. Scudding clouds and a fine drizzle at 6am. did not bode well. But gardeners and garden lovers are made of stern stuff! Before 10 am a pair of determined tour-ers walked up the driveway. They had decided to park on the main road and walk up because they wanted to see the woods. They told me three more cars were waiting for 10am! 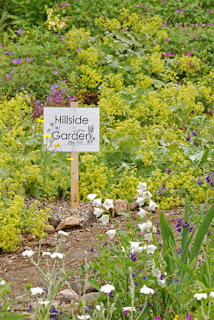 The bird feeders were in place.... 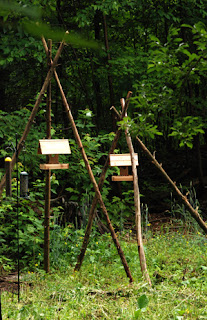 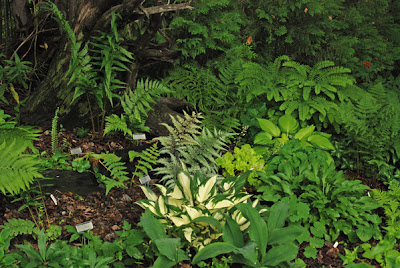 The ferns were bright-eyed and bushy-tailed..... 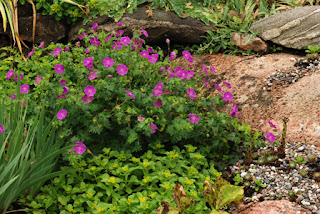 And there were flowers, here and there.

The big winner was Digitalis grandiflorum, a terrific Foxglove with the happy combination of lovely soft yellow bells and a cast-iron, fully perennial constitution. People asked about it and wanted it and I dug up many little plants to give them. Luckily I hadn't weeded the patch above the Hillside Garden where they were growing in a solid mat! Some advantages to not weeding! Here it is beside the Herb Garden fence: 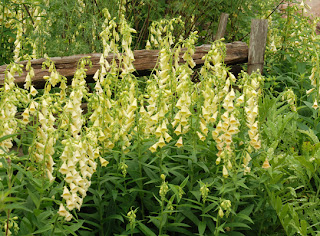 The weather improved a lot on Sunday, and we even had some actual sunshine. The light coming through the trees above the marsh is always striking. I love the feeling of airiness it gives. 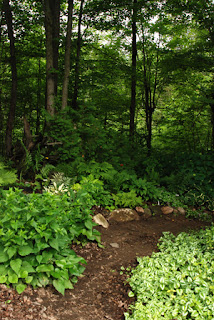 We did lose one party of 3 in the woods. I noticed them starting off down the Marsh Trail but figured with the woods so wet they would soon be back. After 45 minutes I was starting to wonder, but then they came out. They looked happy enough so I stopped worrying about them, but they came over and asked me how far the trail went. I guess they went pretty far! Another pair of visitors brought a sweet white miniature poodle-something (these dogs all have such silly names but they all look alike: poodles with legs too short for their bodies!) and they went down the same trail. When they came back the poor thing was covered with green bits and black muck. He'd apparently stepped off my neighbour's boardwalk, thinking the duckweed on the water was solid! We washed him under the tap and dried him off. Not a happy pup.


It was interesting to see people in my usually empty garden. For a little while, it didn't seem quite as 'mine'. Probably, a little distance will do me good. I get too wrapped up in things and lose perspective. 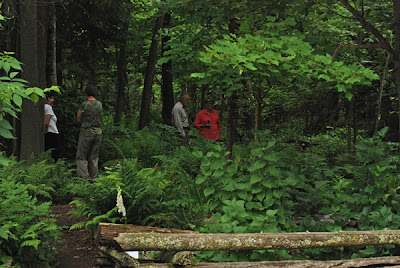 On the whole, though, it went very well. The volunteers were great, the visitors said nice things, Kip the Border Collie was A Very Good Dog, it didn't rain too-o-o-o hard, and I survived!
Posted by Lis at 2:40 PM