A Surprise, A Mystery, and, finally, some Rain

There really are times when you see something and can hardly believe your eyes! A couple of days ago I went to open the bedroom window because it was cooler outside than in, and I happened to glance over towards a messy spot which started as a compost pile, morphed into a stuff-to-be-burned pile, and then became one of those don't-go-here-it's-just-too-awful garden corners. We all have them. Anyway, I saw something reddish.... ran outside to look, and there was a fine Lily with buds almost ready to open. I must 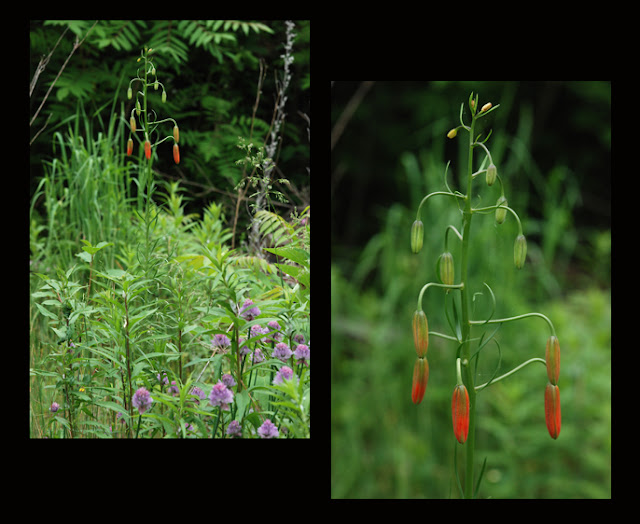 dumped seed pots which hadn't germinated on the pile, and one seed was able to grow. What is most amazing is that I had left the spot alone long enough for it to grow to blooming size. Actually, given that this garden is too big and I never have enough time to do everything, maybe it's not so amazing.

I wonder what it is! 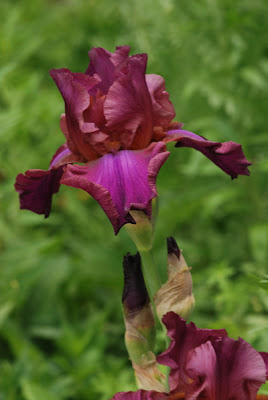 Have you ever had something bloom, and had no idea that you had such a thing, where you got it, or why you put it where it is? That happened to me this week. Suddenly there was a gorgeous wine-red Iris blooming in  my Hillside Garden. It was behind a blue Oat Grass, getting engulfed in with a huge patch of Rudbeckia 'Goldsturm'. Why on earth would I have put a Bearded Iris there? And who gave it to me? I gave up on the large Bearded Irises years ago. I love those opulent flowers, but not the dreadful spotted leaves the rest of the summer. And the gales we usually get right at Iris time were the final straw. So now if there is a large Iris in my garden, it must have been a gift. Whoever gave me this one, thank you, it is very beautiful, and I promise to move it.

What a good thing that 'Goldsturm' isn't blooming!

It's been very dry for a couple of weeks. First we had oceans of rain, then none. Most of my garden is well mulched and has stayed damp and workable, but the Hillside is solid clay, faces South, and slopes. It turned into a rock. I put the tines of the garden fork on the ground, stepped on the fork, and nothing happened. It wouldn't even go in, it was that hard. Weeding was impossible, and moving plants was not to be thought of. A fine soft rain has been coming down for an hour now, so it should be good for working there tomorrow.