I first got to know Allium cernuum, Nodding Wild Onion, in Banff National Park where I would occasionally come across it in the woods at lower elevations. It tended to be solitary, one stem, and rather delicate. The white and pink flowers hovered delicately above the various other woodland plants. A couple of times I found it blooming with the purple Alpine Clematis, a rather good combination. Needless to say, when I started my garden here, I wanted it, so when I saw Allium cernuum in one of the seed exchanges, I asked for some seed. Better yet, I eventually saw A. cernuum f. album listed, and sent for that too. 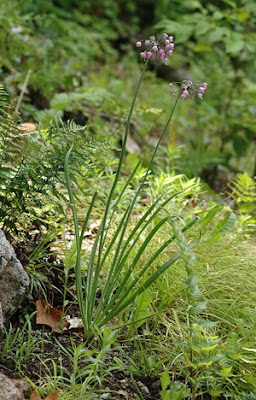 A. cernuum grew easily and bloomed the next spring. I put it at the base of some large rocks in the rock garden, and it has been happy there. A little light shade, good drainage and reasonably good soil are all this plant needs. It blooms in June and has spread to be a fair-sized clump now. It does set a lot of seed, like all the Alliums, but it's easy enough to remove them.

Then I got seeds of A. cernuum album and grew those. Look at this now: 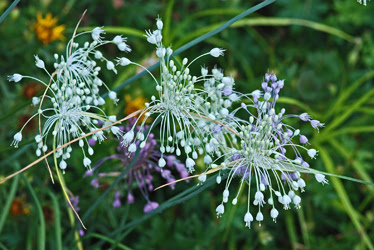 Very nice, but not A. cernuum! The huge bracts (maybe they have another name, alliums have their own vocabulary, the straight stems and the fact that this is blooming now, nearly a month after A. cernuum tells me it is something different.

So I asked for seeds of A. cernuum album again, and what did I get but this: 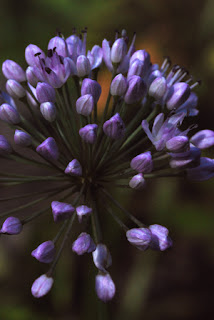 Again, very nice, but not A. cernuum, and certainly not anything forma album. This one is probably A. stellatum, Wild Onion, and a good addition to my native plants list, but dang it, I wanted A. cernuum album!

Finally, this bloomed this year: 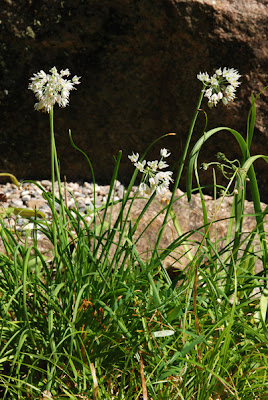 Allium cernuum forma album, as I live and breath!

Now, will someone please explain why it is much smaller than A. cernuum (look at the leaves and seed head arching in from the right hand side which are from the A. cernuum plant right beside the white one), blooms a month later, and has round flower clusters instead of the 'fireworks' shape of its cousin?
Posted by Lis at 6:23 AM