I defy anyone to find a flower more blue, more brilliant, more astonishing, than our native Fringed Gentian.

Fringed Gentian, or Gentianopsis crinita if you want to be formal about it, is one of our showiest natives. It has a large distribution, the entire Eastern side of our continent in fact, but it seems to be one of those flowers that is either present in large numbers or entirely absent.  It is a biennial, forming a very small rosette of rather succulent pale green leaves the first year, and a cluster of flowering stems the second. I have seen it by the acre on the Paden Road alvar, sprinkled like blue stars under the willows and aspens at Limerick Forest, and as a ribbon of blue along a section of the K&R Trail in Lanark County. But do you think I could get it to grow at my place? No. So far, Pine Ridge has been one of those places where it is entirely absent.

And not for lack of me trying. I brought seeds home several times, and tried starting them in pots like I do a lot of seeds. I could never get them to germinate. In a baggie with damp vermiculite in the fridge they did, putting out very tiny white roots, but they didn't survive being moved into a pot. Pots I left outside to germinate over winter remained disappointingly empty.

Two years ago I brought home seeds from the Fringies along the K&R Trail. These were very robust plants, close to three feet tall, and covered with blooms. They grew in the narrow strip between the gravel of the trail and the weedy slope down to the ditch. Not wanting to try them in pots again, I sprinkled most of them in a spot along my driveway that is somewhat alvar-like, having underlying limestone pavement with the resulting sparse plant cover, and being, like an alvar, damp in spring and fall and dry in summer.On my way back to the house, there were a few seeds left in the envelope and  I dumped them out at the end of the
Rock Garden near the Canada Lily. Still along the driveway, but higher up the hill and a rather weedy spot.

Of course, I kept checking my sort-of-alvar for Fringed Gentians, even going so far as to closely inspect the ground for signs of pale green rosettes. Nothing.

Coming back yesterday, I checked again. Still nothing.

But what did I see near the Canada Lily? 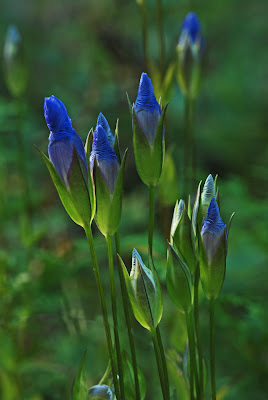 Yes! Fringies!!!! A whole patch of them, at least 20 plants, about two feet tall, and with many flowers and buds. 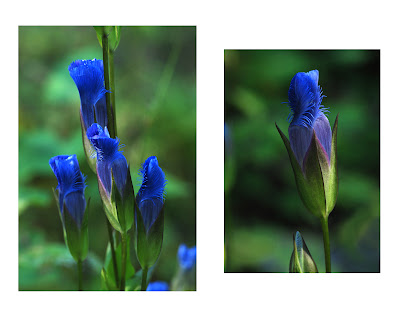 They weren't quite open - the flowers only open in the sun, but the colour! So blue, so perfectly shaded with rose, so delicately touched with green.The calyces are an unusual diamond-shape in cross section, giving the blooms a strong sculptural quality.

I had to check them again today, just to make sure they were real. If it is sunny tomorrow and the flowers open more, I may just have to post more pictures!