Do you smell something? No? Maybe you will when I tell you another name for this vine is Carrion Flower. 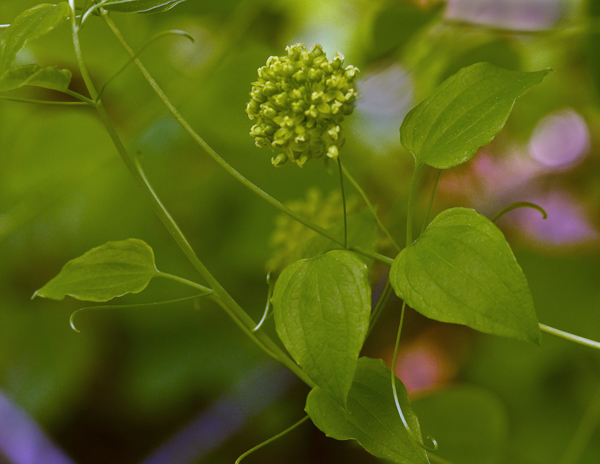 Kip and I were walking in the back of our woods and stopped briefly because, with all the growth due to the cool rainy summer and the fact that our trail has had to be re-routed around a massive blow-down, we were a little disoriented and not sure where we were. At least I wasn't. Kip, being a Dog, probably always knows where he is. Anyway, we were standing there and I became aware of an Odor. I looked around, because it was the sort of Odor that dogs love to roll in and I had no desire to wash a dog when I got back home. But he was just standing there, looking up at me and waiting for me to go on.

Another whiff came my way.

Turning my head, I nearly bumped into a round cluster of odd yellow and green flowers. I looked more closely. "Carrion Flower", I thought to myself. I had never seen it before, but had read about it, and as soon as I saw the bloom I knew. 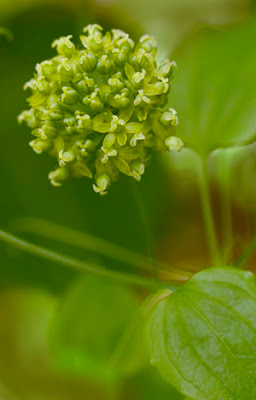 Here is a closer look at the flower cluster. It reminds me a bit of Milkweed.

Of the seven or eight species of Smilax  found in Ontario, this is the only soft vine. The others are woody and have prickles. But they all have clusters of greenish flowers, followed by dark blue or brownish berries.

This one was draped over a Prickly Ash. It was growing in a damp and well-shaded area, and obviously pretty happy there. The vine was already a good 15' long and there were numerous flowers.