But, after lunch and a morning spent on the computer, I went walkabout in the garden and the inevitable happened. I went and fetched a hoe and went after a few Sumach roots that were left when I dug over the vegetable patch this Spring and which had sprouted. It was amusing to see the sprouts in a line, with the ones nearest the parent Sumach the tallest and the rest getting smaller as they got further away. It was satisfying to pull up the largest, get hold of the root, and pull and watch the others get dragged under the surface and then out. The slope the garden is on is infested with Sumach and the roots travel great distances.

Only an idiot would plan a vegetable garden so close to a Sumach patch.

When you pull a long Sumach root, make sure you don't uproot something you planted! Luckily this one snaked through the Tomato patch and it pulled out safely.

I have 3 kinds of Tomatoes in the veg patch this year. Cherry tomatoes (my favourites), a regular Big Beef type, and what I call my '$15,000 Tomato'. Two years ago, when I had to get a new truck (brakes failed on the old one and gave me the biggest driving scare of my life) I ended up liking one at a service station in the City. Took it for a test drive, someone cut in front of me, the brakes worked. Measured the box, it was a full 6 feet so it would take the tables I need for my pottery display at shows and the Market, the price wasn't too bad... but I'm a cautious sort, especially when it comes to spending money, and I asked for a day or two to think it over. We agreed I could leave a deposit (yikes), think for 2 days, and then either cancel and get my deposit back, or commit and send them the balance. Meanwhile they would service the truck and get it ready.

I decided to get it. After looking for about 2 months I knew there was nothing much available that met my criteria. It was larger then I really wanted, but there simply were no mid-size pickups available. Oh, maybe on the West Coast, or downtown Toronto, but not here.

When I went in to finish the deal and pick up the truck, I went in to meet with the guy running the office. He happened to have some odd lumpy orange and red striped 'things' on his desk. I picked one up and teased him a bit: 'What the heck is this?'.

'Tomato', he said, in a charming Spanish accent,. 'Ah', he said, 'you take some good bread. You spread on some good fresh butter. You cut the tomato in thick slices, put on. Sprinkle some salt, pepper, a wipe of mayonnaise. Best tomato sandwich you will ever eat. Here, have one.'

The balance owing was $15,000. I did the e-transfer, picked up a tomato, got into my new truck and drove home.

When I got there, I sent him and the salesman an email saying 'Truck is great, and thanks for the $15,000 tomato'.

I did what he said and indeed it was the best tomato sandwich I had ever eaten.

I kept a few seeds, and am now growing them myself. They are a long-season tomato so need to be started early, but even so I get some wonderful, odd-looking, strangely striped tomatoes in about September. They are worth the effort, although $15,000 might be a bit much. 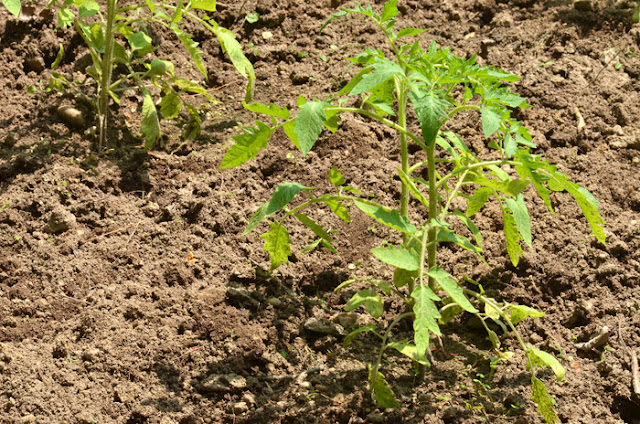 The plants are over a foot tall and look pretty good. They have survived several nights of near frost and some incredibly hot days, like today. They've been very dry, too. I do water the veg garden, but that's never enough. Keeping the ground lightly hoed up gives a slight mulch effect and keeps the surface moisture in a bit. 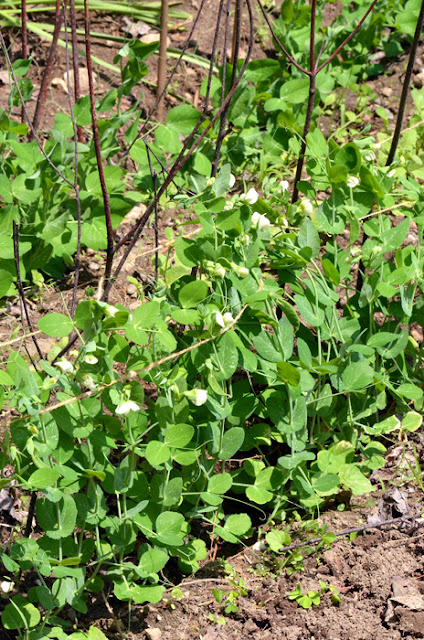 Having scuffled up the Tomato patch, I tied up the Peas. They were attaching to the sticks I put in, but I felt a string would encourage better climbing.

They are still pretty short, not having liked the heat we've been having, but blooming. There is a deep row of Daffodils behind them, which I planted there in a moment of madness some years ago. Soon as they go dormant, they're out of there.

The Squash, Cucumbers and Zucchini were looking a big sad. They really, really, didn't like those cold nights.

But I see signs of recovery.

Next thing I knew, I was digging in the old chicken coop, filling a pail with the old bedding. It's rotted beautifully and makes a great mulch. Wish I had more of it!

Here's a Squash, all tucked in with a thick layer of well-rotted chicken bedding. 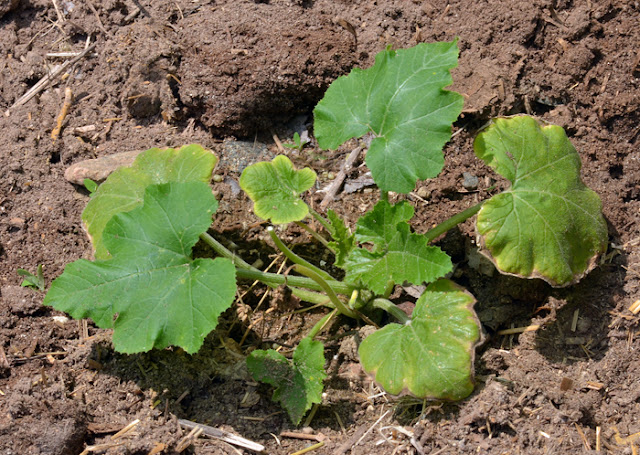 This whole business of mulching and planting is part of my program for making more vegetable garden. Last year I put an old tarp down where the squashes are now and solarized a nice 10 by 10 feet section. The soil there is pretty rocky and sandy, so the mulch is doubly needed. I've done this before and it works wonderfully well. It may not stay a veg patch - there's already a Crabapple planted at the side - but if I can get rid of the old chicken coop itself, there will be more room for edibles there.

Did you know that Crabapples seed themselves around? It never occurred to me that they would, and here I was wanting a tree with yellow crabs and asking for it at the nurseries and being told nobody wanted that, and then last Fall didn't I find 2 small ones that both had yellow apples. A largish one that has been growing against the hydro pole in my Herb Garden turned out to have large yellow crab apples, and later I was surprised to find a 2 foot high one behind the house with those tiny apples the birds like, in yellow. As soon as I figure out where to put it, it's moving. How lucky is that?

My Sampler Garden is under a lot of Maples, Oaks and deciduous shrubs. The leaves act as a natural mulch. A few things aren't able to push through it (violets, for example), but most woodland plants do. It's the garden that needs the least work, the mulch of leaves keeps most weeds out. Plus it's usually cool in there!

This small Walking Fern likes both the moss mulch and the coolth: 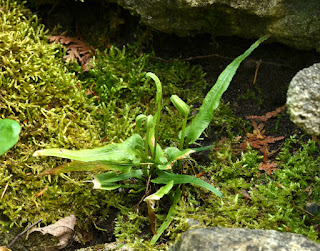